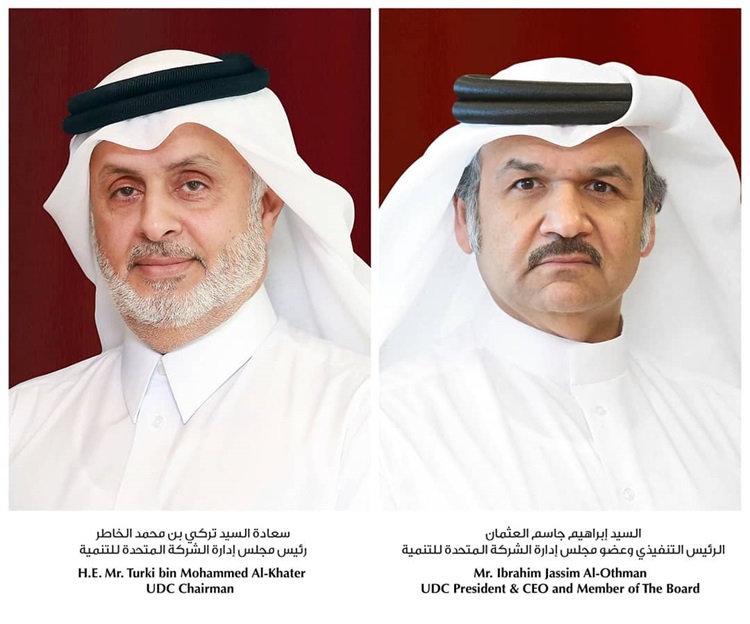 Net profit of QR 458 million and proposed dividend of 5%


• Al-Khater: “UDC’s projects are strengthening the future of urban development in the State of Qatar”


• Al-Othman: “A myriad of achievements at The Pearl-Qatar and commencement of construction at Gewan Island as the cornerstone for our future developments”


• Al-Othman: “Two decades of excellence in the delivery of sustainable ventures and 2020 will be about achieving the goals”


United Development Company (UDC), a leading Qatari public shareholding company and the master developer of The Pearl-Qatar and Gewan Island, announced its financial results for the year 2019 achieving net profit of QR 458 million and revenues of QR 1.76 billion, with an increase of 8 % compared to 2018. The net profit attributable to equity shareholders stood at QR 423 million, and basic earnings per share amounted to QR 0.120.


Commenting on these results, UDC Chairman, H.E. Mr. Turki bin Mohammed Al-Khater said: “Despite a challenging real estate market in 2019, UDC achieved good financial results driven by the Company’s success in performing featured real estate development projects and attracting new investments into The Pearl-Qatar amid the completion of major milestones across the Island”.


H.E. Mr. Al-Khater added, “The proposed dividends for this year are in line with the volume of the real estate projects that the Company will develop and the cash outflow that will be spent on these projects during the year 2020. In this context, UDC’s investments in long-term projects, with an estimated amount of QR 5.5 billion and in accordance to the Company's five-year business plan 2019-2023, will ensure the Company’s sustainable growth and the creation of new opportunities and revenue sources over the long term”.


H.E. Mr. Al-Khater continued: “In line with this business plan, it is intended that capital contracts will be awarded for developing the projects with an amount of QR 3 billion and with cash outflow for those contracts amounting to an estimated QR 1.9 billion during 2020”.


H.E. Mr. Al-Khater further added: “These financial results demonstrate that UDC’s strategy of diversifying its revenues through the sale and leasing of real estate properties, while investing in the ongoing development of The Pearl-Qatar and long-term ventures, such as Gewan Island, is achieved”.


“These projects will further bolster the Island’s position as an attractive destination for families and investors alike, and will ensure the Company’s sustainable growth and the creation of new opportunities and revenues sources, therefore positioning UDC as a pioneer in shaping the future of urban development in the State of Qatar”.


For his part, UDC President and Chief Executive Officer and Member of The Board, Mr. Ibrahim Jassim Al-Othman, described 2019 as a year of focus and consolidation of efforts behind UDC’s core business; real-estate.


“In the past year, UDC placed a strong emphasis on expanding both its residential and retail offerings, and building on its community and customer-oriented initiatives across The Pearl-Qatar, while moving forward with the development of Gewan Island”, Mr. Al-Othman stated.


“These initiatives proved to be successful, as UDC maintained good revenues and enforced The Pearl-Qatar’s position as a safe and vibrant destination of choice for families, businesses and tourists”, Mr. Al-Othman said.


Mr. Al-Othman further indicated that the stability in occupancy rates at The Pearl-Qatar, enhanced recurring revenue generated from the leasing of residential and retail units, as well as the sale of residential units and plots in 2019.


Retail leasing witnessed an increase of 18% in leased retail space compared to 2018 and the opening of 65 new retail brands at The Pearl-Qatar, across the three main retail hubs in Porto Arabia, Medina Centrale and Qanat Quartier.


Residential occupancy further thrived with 178 new rental contracts signed for UDC properties, while UDC residential sales achieved a 115% increase for completed units and a 35% increase for residential units under construction in Al Mutahidah Towers, compared to 2018.


According to Mr. Al-Othman, “Impressive sales of plots in Giardino Village, Floresta Gardens and Qanat Quartier Marina in addition to Gewan Island in 2019, are yet another indication that UDC is considered a trusted developer of premium real estate investment products”.


In 2019, UDC signed an agreement to finance the development of Gewan Island and concurrently, marine works at the Island witnessed a significant progress and construction works of Gewan Island’s entrance bridge were successfully launched.


Highlighting the Company’s plans and prospects for 2020, Mr. Al-Othman said: “The fundamental development phases achieved in 2019 will enable UDC to pursue its growth journey, and to capitalise on two decades of excellence in the delivery of sustainable ventures to residents, investors, businesses and shareholders alike. As such, 2020 is going to be all about achieving our goals with Gewan Island being the cornerstone for our future developments”.