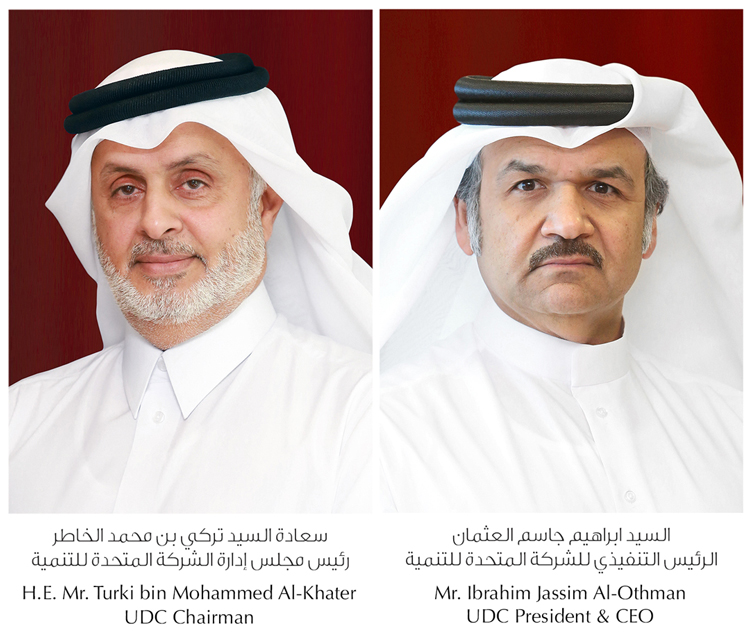 Al-Khater: “Five-year business plan, of which QR 5.5 billion worth of investments will be embarked”

Al-Othman: “The number of residential properties under lease increased by 31%”


United Development Company (UDC), a leading Qatari public shareholding company and the master developer of The Pearl-Qatar and Gewan Islands, announced its financial results for the year 2018 achieving net profit of QR 544 million and revenues of QR 1.6 billion. The net profit attributable to equity shareholders stood at QR 501 million, and basic earnings per share was QR 1.41.


In 2018, UDC pursued to the continuation of development in The Pearl-Qatar, completing many milestones in accordance to the masterplan. H.E. Mr. Al-Khater added.


Key ongoing developments on the Island include Giardino Village, Floresta Gardens and Al Mutahidah Towers project, which witnessed in 2018 the construction of the Towers’ connecting bridge, the most complicated element of the project, and a unique feature among towers on the Island. Each of these developments are uniquely designed to further enhance the ambiance of the Island, while attracting ever more investors, residents, retailers and visitors, thereby assuring the economic viability of The Pearl-Qatar for years to come.


H.E. Mr. Al-Khater added: “Building on its success, UDC has revealed the project of constructing “United School International”, an international school which will be developed in Giardino Village precinct to meet the needs of the community at The Pearl-Qatar Island and the neighborhood. In addition to the commencement of construction works for two commercial showrooms in Abraj Quartier”.


H.E. Mr. Al-Khater said that the development of Gewan Island is part of UDC’s upcoming five-year business plan, of which QR 5.5 billion worth of investments will be embarked, reflecting the Company’s strong commitment to the development of sustainable projects across The State of Qatar.


UDC President and Chief Executive Officer, Mr. Ibrahim Jassim Al-Othman, affirmed UDC’s dedication in advancing and executing its distinctive development projects, while pursuing financial returns that meet the expectations of shareholders, in light of the good financial results achieved in 2018.


“The sound financial results for 2018 were driven primarily by a combination of sale and lease of real estate properties, as well as cost efficiencies. Several cost optimization initiatives were implemented this year that resulted in UDC attaining more favorable terms for its supplies, and realizing other cost proficiencies”. Mr. Al-Othman explained.


Mr. Al-Othman indicated that the increase in the occupancy rates enhanced recurring revenue generated from the leasing of office, residential and retail units in 2018.


“UDC will continue to expand its retail and residential offerings in 2019, while pursuing development works in The Pearl-Qatar”. Mr. Al-Othman said.


UDC’s commitment to improving customer experience has cemented The Pearl-Qatar’s position as an increasingly popular destination for office, residential and retail tenants to live and work, Mr. Al-Othman noted.


This was evident in the number of vehicles entering The Pearl-Qatar, which rose from 11 million in 2017 to 13 million in 2018. UDC is a leading Qatari public shareholding company with a mission to identify and invest in long-term projects contributing to Qatar’s growth and providing good shareholder value.