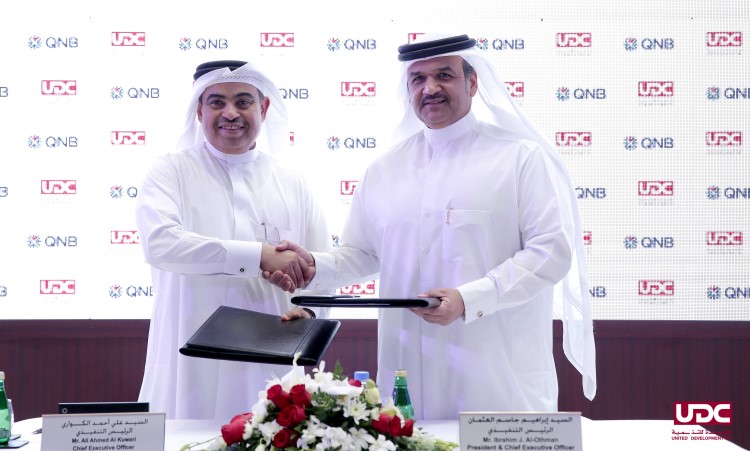 United Development Company (UDC), one of Qatar's leading shareholding companies and master developer of The Pearl-Qatar, and QNB have signed a letter of intent to work on providing future financing required for the development of Gewan Island project.

Commenting on the signing, Mr. Ibrahim Jassim Al Othman said: "This agreement with QNB lays the foundation for UDC's growth plans and the expansion of its operations base through QR 2.5 billion worth of investments in the development of Gewan island. The project falls in line with our efforts to provide leading real estate products in the local market that meet the needs of investors and residents

For his part, Mr. Ali Ahmed Al Kuwari said: "We are proud of the outstanding relation between UDC and QNB, which represents a strategic alliance in the interest of developing and strengthening the national economy. We are confident that this agreement will help to further UDC’s objectives in terms of financing its expansion plans in Gewan Island, which will positively impact its customers and help the company achieve its objectives of maintaining a leading position in the local market."

The signing of the letter of intent took place on the sidelines of UDC’s participation in Cityscape Qatar 2018, where HE Sheikh Abdullah bin Nasser bin Khalifa Al Thani, Prime Minister and Minister of Interior, inaugurated Gewan Island, and signing three contracts related to the development of the project with prominent international companies in line with UDC’s efforts to contribute to development projects that bolster Qatar’s position as a global investment hub.

Gewan Island, UDC’s latest real estate project, spans across 400,000 sqm and is located adjacently to The Pearl-Qatar. The island, which will be completed in 2021, features residential units, entertainment facilities, retail outlets, restaurants and cafes within a vibrant, modern and integrated community.