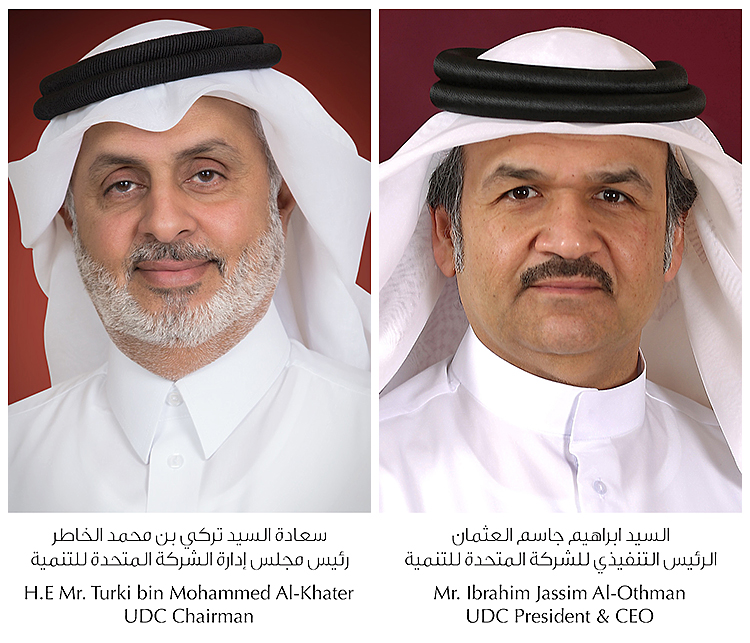 
Al-Khater: “Three major developments for UDC are progressing according to plan”


Al-Othman: “Increase in volume of residential properties rented by 22%”


Al-Othman: “Increase in volume of retail areas under lease by 6%”


UDC Chairman H.E. Mr. Turki bin Mohammed Al-Khater said, “UDC has achieved good performance given the challenging conditions prevailing in today’s real estate market. UDC is relatively strong showing under difficult circumstances was actually a testament to the quality of properties being offered at The Pearl-Qatar and to the prospective nature of three major developments being currently undertaken by UDC, pursuant to the master plan. This aims to ensure that The Pearl-Qatar remains the premier real estate development in the State of Qatar and the location of choice for investors, developers, owners, residents and tenants”.


H.E. Mr. Al-Khater noted that “UDC’s unique real estate portfolio at The Pearl-Qatar includes properties for sale, consisting of land plots, apartment and townhouse units, and properties for lease, consisting of office space and residential and retail units, which all are located in a self-sufficient community. These uniquely designed properties have an ambiance that is unmatched by other real estate developments in the State of Qatar. So, while The Pearl-Qatar was already well positioned, three additional major developments are being undertaken by UDC to enhance The Pearl’s experience and make it unmatched”. H.E. Mr. Al-Khater further said, “the crown jewel of the three major developments is (i) Gewan Island, a development that will include an assortment of waterfront and beach front villas, private island villas, apartments as well as retail and hospitality outlets, entertainment and sports facilities, and mosque, artistically woven into the reworked and reclaimed land that is adjacent to The Pearl-Qatar”.


H.E. Mr. Al-Khater concluded his remarks by saying “UDC is witnessing good progress on its development projects per the master plan in a way that continuously brings a unique quality and character to The Pearl-Qatar of being the premier destination of real estate developments in the State of Qatar”.


UDC President and Chief Executive Officer, Mr. Ibrahim Jassim Al-Othman affirmed UDC’s dedication in advancing and executing its distinctive development projects, while achieving sound financial returns on the projects and to the Company as a whole, keeping the ultimate objective of meeting the shareholders’ expectations.


Mr. Al-Othman continued by providing an insight on the major achievements by UDC during the first nine months of 2018, including the sale of a major land plot in Viva Bahriya district for mixed use development, another in Abraj Quartier district for commercial use development, and a major lease agreement with a corporate tenant covering 285 units in Medina Centrale.


Mr. Al-Othman also noted the growth that UDC has achieved over its recurring operational activities. A year over year increase in both its residential and retail leasing business at The Pearl-Qatar with occupancy rates for both business segments on the rise. The volume of residential properties rented during the first nine months of 2018 had increased by 22% compared to the first nine months of 2017 while the volume of retail areas under lease had increased by 6% for the same period. These increases indicate The Pearl-Qatar is becoming a favorable destination place for residential and retail tenants in Qatar to live and operate a business.


Mr. Al-Othman concluded his remarks by saying, “UDC’s financial results for the nine months of the year 2018 were good, considering the challenging conditions under which they were achieved”. He affirmed that efforts will be always continued to achieve better financial results and meet the shareholders’ expectations.


UDC is a leading Qatari public shareholding company with a mission to identify and invest in long-term projects contributing to Qatar’s growth and providing good shareholder value. Established in 1999, the Company was first listed on the Qatar Exchange in June of 2003. It has an authorized share capital of QR 3.54 billion and total assets of QR 18.2 billion at 30 September 2018.